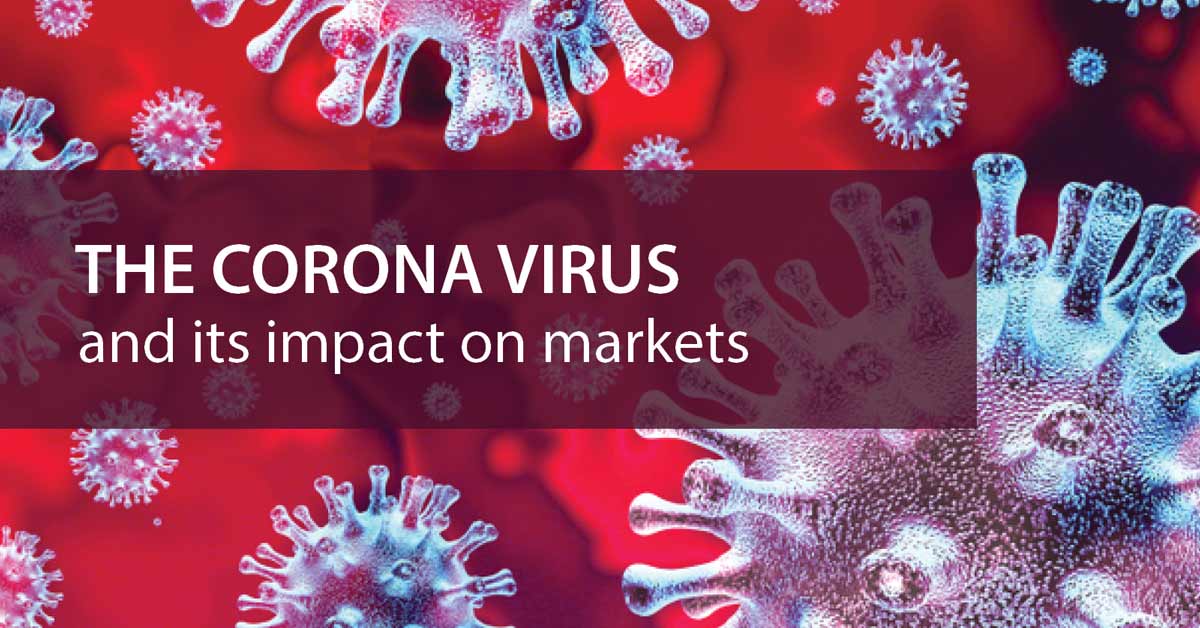 The Coronavirus and its impact on markets

The Coronavirus is slowly jumping international borders after its initial spread in China, and markets have not been immune to its impact.

Coronaviruses are a large family of viruses which have long been known to create illnesses. There is currently a new coronavirus affecting people who have recently been in the city of Wuhan, China. From a public health perspective, this is a rapidly evolving situation and there remains “much to learn” about how it is spread, its severity, and best treatment.

The World Health Organisation (WHO) has now agreed that the outbreak meets the criteria for a public health emergency of international concern. This means that WHO can coordinate the global response by advising countries on public health measures and recommending travel bans.

The virus has spread outside China. At this stage there are a few cases globally including in Thailand, Japan, Singapore, Australia the US and France.

Authorities have been proactive in taking steps to contain the spread of the virus, including closing transport in Wuhan and cancelling celebrations for the lunar new year.

Its spread has impacted confidence, and is now showing signs of having a material impact on tourism, as travel to and from China is restricted.

Here, we take at some of the key market developments in relation to this feared pandemic. It’s important to note that this is a situation which is constantly evolving, and that the below is a point in time assessment.

What we know so far

This situation is evolving. At this stage, share markets have been hit, especially in Asia on concerns around the impact of the virus. For now, Australian and US shares have been more resilient.

There have been numerous health scares in recent history (SARS, bird flu, swine flu, MERS, Ebola). While the loss of life in these instances is tragic and the panic caused in affected regions impacts everyday life, the worst-case scenario of a global pandemic like the 1918 Spanish Flu (that killed up to 50 million people) has not come to pass.

For markets, investors should be alarmed but not panic just yet. While the number of total Coronavirus cases has increased dramatically over the past week, the daily rate of change in new cases looks to be plateauing.

While it is impossible to know exactly how much more the virus can spread, most epidemics have taken 6-18 months to fully run their course and then the actions taken by authorities (hygiene, quarantine, banning gatherings, preventing travel) start having an impact.

The 2003 impact of the SARS outbreak was shorter due to rapid action by authorities. The quick reaction by Chinese authorities this time round is reason for optimism.

Comparing the current episode to SARS is useful. The 2003 SARS outbreak infected 8000 people, mostly in Asia, in 30 countries over 5 months at a mortality rate of 10%. While the number infected was not that great, SARS had a big negative impact on countries economic activity. GDP in Hong Kong and Singapore in the June quarter 2003 fell by over 2% as people stayed home (lower retail sales), missed work and travel was cancelled. Growth then rebounded.

Asian shares fell in April 2003 even though global shares were rising. Usually the share market low coincides with a peak in the number of new cases there is a risk that Asian equities fall further.

This time round, the risk to disrupting economic growth is high because the spread of the virus coincides with the lunar new year, and the associated spending that goes with it (travel, eating out, retail sales).

It’s also happening around the same time that China and emerging markets economies are showing signs of stronger growth, with the virus having the ability to disrupt activity. The other point to note is that the mortality rate (so far) for the new Coronavirus is lower at 2-3% compared to SARS (10%) and much lower than Ebola (at 50% and higher).

We expect a fall in Chinese GDP around 2-3% over the March quarter as Coronavirus is more widespread than SARS (although it is less lethal and there have been faster actions by authorities). While this is a big hit to growth initially, GDP growth is likely to rebound in the June quarter, although the total losses from production are unlikely to be fully recouped.

In Australia, there will be a temporary disruption to tourism, education and exports (particularly commodities and to a lesser extent agriculture). Chinese tourist and education arrivals make up around 20% of total arrivals – a significant chunk.

There could also be an impact if Australians start staying home. On our estimates the total detraction to growth is worth around 0.2-0.3% of GDP. But there are offsets – the $A depreciation from a risk-off global environment will boost broad export growth and lower travel to China is seen as a reduction in imports and it could even mean that Australians choose to holiday in Australia.

Along with the bushfires, the total negative impact to March quarter GDP growth could be around 0.5% which is a decent amount.

Despite the rightly mounting concern about the spread of the Coronavirus, as mentioned above, there is reason to believe that the threat will be contained and managed, but it could take some time with epidemics usually taking 6-18 months to run their course.

The rapid and widespread response from the Chinese government, and mobilising of countries outside China to detect and contain cases of the virus which have crossed their borders are important steps in containing the virus.

Markets have been impacted by similar situations before, like SARS, and have recovered but the concern about the spread of the Coronavirus will keep investors cautious and markets volatile in the near-term given the disruption to economic activity.

Once it becomes more evident that the number of people infected has reached a peak, markets tend to take this as a positive signal.